The Bing Boys at Etaples 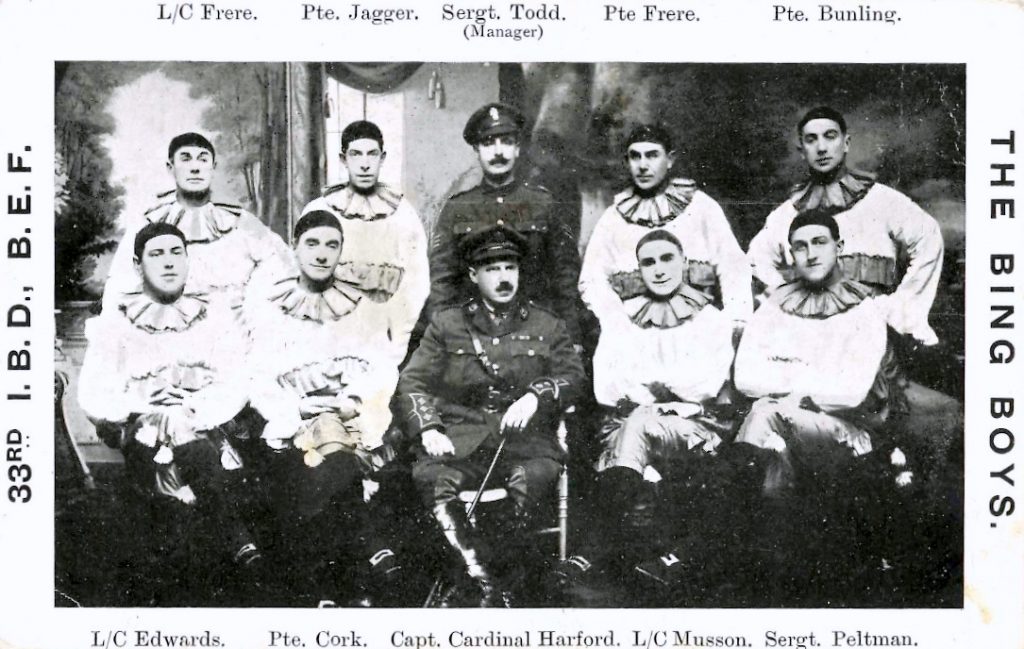 The only identifiable person in this Bing Boys group photo who can be matched to a record on British Army Ancestors is Captain Cardinal-Harford. Despite their encouragingly obscure sounding names I could find no men called Bunling and no men called Peltman. There are 89 men called Frere and 548 called Musson. If only the creator of this card had thought to add a forename initial or a regimental number. If only.

Major Hugh Cardinal-Harford certainly wears the medal ribbons of the Boer War.  He had served with the 13th Essex Regiment and has papers in WO 339 which I must try and access. Doing so may enable me to date this photo which could even have been taken after hostilities had ceased. The same man also has papers in WO 97 and there is small article about him on the West Ham Pals blog. So one way or another, there’s  quite a lot on this man, but nothing – that I have been able to find so far – on the others.

It is possible that Bunling, Frere, Musson, Peltman et al are Canadian soldiers which would explain why I have been unable to find any men called Bunling or Peltman on this site of British Army Ancestors. Canadian troops are known to have referred to themselves as the Bing Boys after Lieutenant-General Sir Julian Bing. However, I also drew a blank for Pelman and Bunling when searching attestation papers for the Canadian Expeditionary Force (CEF). Perhaps it’s not ‘Bunling’ after all, but ‘Bunting’, which sounds more probable.

I see also that there appear to have been a number of incarnations of Bing Boys comic turns. The Bing Boys are Here was a comic revue which ran for 378 performances in London’s West End in 1916 and 1917. There was also a troupe of British and commonwealth PoWs at Gustrow who also went by the name of the Bing Boys. None of the men named in this interesting Great War Forum discussion share names of the men on my photograph.

So for now, the majority of the men in this photo must continue to remain, last name aside, unidentified. The speed of developing addiction depends on why the person is taking the pills. If https://www.ncahcsp.org/buy-xanax-online/ Xanax was prescribed by the doctor, the disappearance of symptoms of depression and improvement of mood and general health are considered normal. The 33rd Infantry Base Depot was located at Etaples, that much is clear, but there is still more work needed to fill in the biographies of this troupe.