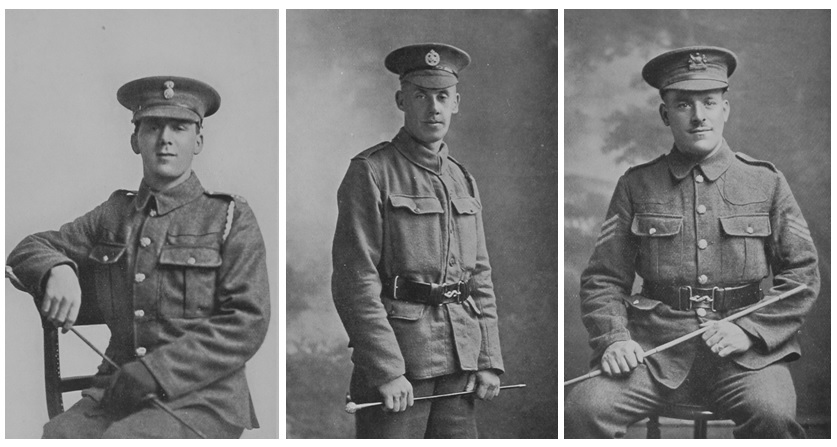 The McCorquodale Group, founded in 1846 by George McCorquodale when he established McCorquodale & Co Ltd in Newton-le-Willows, was a printing company which, by the time of the First World War, had also opened up branches in Glasgow, London and Wolverton. There were also affiliated companies in Crewe, Flint, Liverpool and Manchester.

The McCorquodale Roll of Honour

The First World War exacted a heavy toll on McCorquodale & Co and the McCorquodale Roll of Honour pays tribute to those employees who did not come home. Each man was given a full page, and a description which included his employment details, the nature of his job, where he worked and for how long he had he been with the company. Also included were his regimental details, date of joining (or mobilisation) and date of his death. Some entries also inlcude the circumstances of his death. On this post, I publish the portraits of three McCorquodale employees. They are, left to right:
18164 Pte James Wheeler, 16th Royal Welsh Fusiliers
James had been employed as a ‘backtenter’ for eighteen months at the North Wales Paper Company Ltd when he joined the Royal Welsh Fusiliers in November 1914. He was killed by a shell in France on the 17th June 1917.
16302 Rifleman Henry White, 16th Rifle Brigade
Henry had five years’ service as a labourer in the case department of the Royal Armoury when he enlisted in April 1916. He died of wounds on the 22nd October 1916.
11710 Sergeant G J Youill, 19th Manchester Regiment
Sergeant Youill had worked as a clerk for H Blacklock & Company Ltd and had thirteen years’ service when he enlisted in September 1914. He was killed in action on the somme on the 9th July 1916.
As a research resource for modern day historians, the McCorquodale Roll of Honour is terrific, and I have added the photos to the British Army Ancestors gallery.  The McCorquodale company is still in business today and operating out of Derby.
I publish a new photo every day on the British Army Ancestors facebook page.