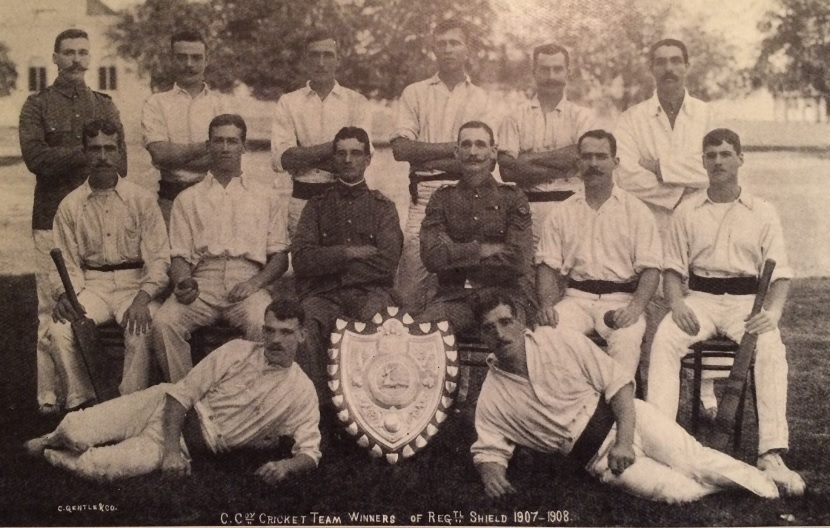 This photograph of men of C Company, 1st Battalion, Sherwood Foresters, appeared in the Sherwood Foresters regimental annual for 1909. The regiment had taken the decision to publish a regimental annual in 1908 and, as noted in the foreword by Lt-General Smith-Dorrien, colonel of the regiment, this new publication followed on from the earlier “I’m 95” publication which had chronicled the activities of the old 95th Foot (later, the 2nd Battalion, Sherwood Foresters) between 1885 and 1902.  Captain H C Wylly had edited that journal and now, as Colonel H C Wylly CB, he was called upon again to edit the new annual.

For the modern day reseracher, regimental annuals are a real boon. 2017 was a notable year for me in that I acquired or built runs of chronicles for the King’s Royal Rifle Corps, Rifle Brigade, and Sherwood Foresters and there’s nothing more satisfying than flicking throught the pages of these journals which are mines of information.

To return to the subject of this post, the image above is published within the pages which deal with the 1st Battalion’s time in India in 1908 and all of the men are named, albeit just rank and last name. Long-term use of https://crohnscolitislifestyle.com/buyativan/ Ativan may increase the risk of certain side effects, especially physical and psychological dependence. This can lead to withdrawal symptoms (see above) when you stop taking drug. However, a separate section in the annual lists all the officers and NCOs by last name, forename initial, rank and – in the case of NCOs – regimental number. It is the regimental number which is crucial here because this then allows a proper search of the 11.5m names on this website to be undertaken with confidence.

Corporal Frearson, (middle row, second from right) remains something a mystery as he appears on the photo but not on the 1st Battalion list of NCOs. There is a 5489 William Frearson who served in the Boer War and was also in India between 1906 and January 1909 and, given the uncommon last name, and the fact that this man was a corporal, I think that this is almost certainly him.