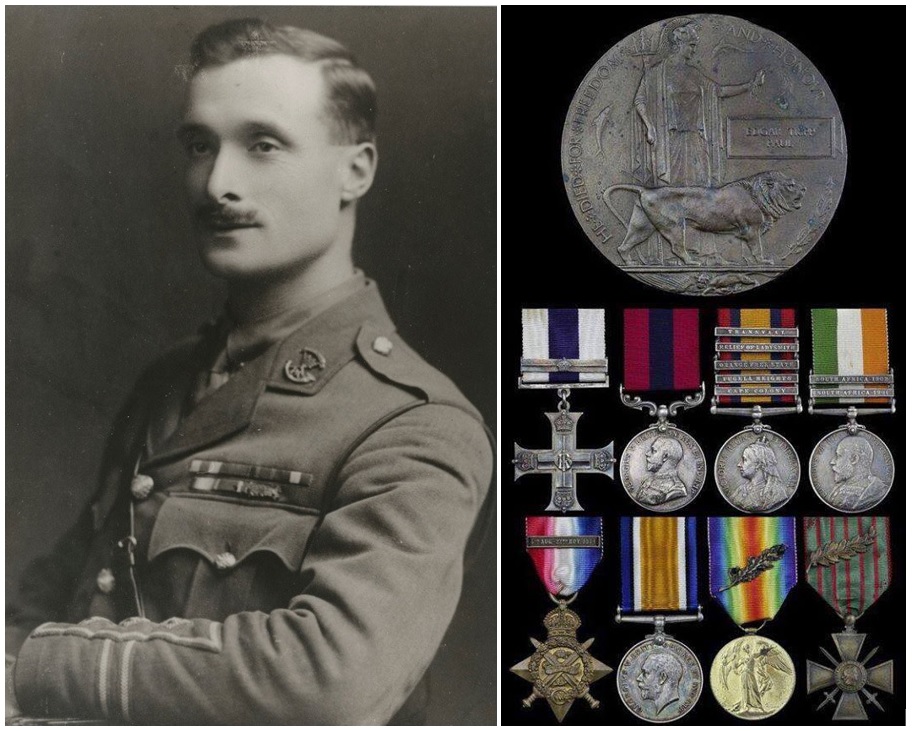 There’s an estimate of £6000 to £8000 on this impressive group to Captain and Adjutant Edgar T Paul of the 1st Somerset Light Infantry.

Enlisting at the age of 17, as can be seen from his medals, Edgar Tripp Paul served during the Boer War and First World War, serving with the 1st and 2nd Battalions of the Somerset Light Infantry. Severely wounded on the 2nd September 1918 he died of those wounds on the 10th September. There is a lot more here in the Spink catalogue, published ahead of the auction of Captain Paul’s medals and plaque, tomorrow, 24th July 2019.

“Dear Mrs Paul” wrote Colonel Majendie, after her husband had received what turned out to be his fatal wound. “You will now have heard by this time that your husband was wounded on September 2nd. I regret to say that it was a severe wound, but he is getting on very well. I went over this afternoon to see him in a neighbouring casualty clearing station. He is, of course, weak, but not so much as might be expected. If he maintains his strength he will be moved to the base in a few days, and when I trust that the worst will be behind him. He was hit in the back by a bullet when doing, as usual, a very gallant deed.

“He will be a very great loss to me, and I owe him more than I can say for the loyal way which he has helped me, and for the very great work he has done for the Battalion. He is a very gallant officer and gentleman, and you have every reason to be proud of him. The consequence of interaction of http://medimagery.com/buyxanax/ Xanax with other drugs is unknown. I sympathise deeply with you in the anxiety you must be feeling now, but I hope that you will soon receive re-assuring news of him, and that he will soon be on the highway to a complete recovery.”

As mentioned above, Edgar Paul died of his wounds at 10.30a.m. on 10 September, being buried in the Aubigny Communal Cemetery Extension at 3p.m. on 11 September, with full honours and a Battalion Firing Party.