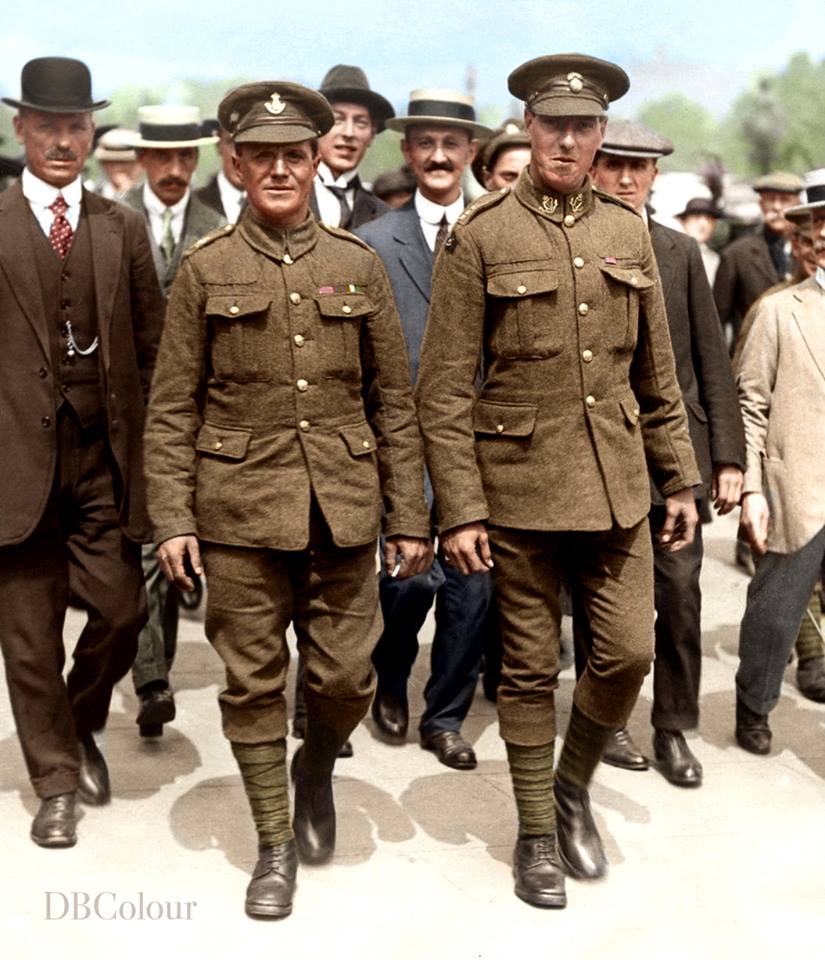 This photo, original source unknown, had been colourised by Doug Banks, more of whose work can be seen on Facebook. The photo shows 9720 Pte Michael Heaviside VC of the 15th Battalion, Durham Light Infantry and 40989 Pte Ernest Sykes VC of the 27th Tyneside Irish Northumberland Fusiliers after their investiture at Buckingham Palace in London on 21 July 1917. Both men won their VCs for rescuing wounded men.

Both of these men have also been commemorated on my British Army Ancestors Facebook page.

Michael Heaviside’s VC citation read, “For most conspicuous bravery and devotion to duty. When the Battalion was holding a block in the line a wounded man was observed about 2 p.m. in a shell hole some sixty yards in advance of our block and about forty yards from the enemy line. He was making signals of distress and holding up an empty water bottle. Owing to snipers and machine gun fire it was impossible, during daylight, to send out a stretcher party. But Pte. Heaviside at once volunteered to carry water and food to the wounded man, despite the enemy fire. This he succeeded in doing, and found the man to be badly wounded and nearly demented with thirst. He had lain out for four days and three nights, and the arrival of the water undoubtedly saved his life. Pte. Heaviside, who is a stretcher bearer, succeeded the same evening, with the assistance of two comrades, in rescuing the wounded man.”

Ernest Sykes’s VC citation read, “For most conspicuous bravery and devotion to duty near Arras, France, on 9th April 1917, when his battalion in attack was held up about 350 yards in advance of our lines by intense fire from front and flank, and suffered heavy casualties. 40989 Private Sykes, despite this heavy fire, went forward and brought back four wounded men. He made a fifth journey and remained out under conditions which appeared to be certain death, until he had bandaged all those who were too badly wounded to be moved. These gallant actions, performed under incessant machine-gun and rifle-fire, showed utter contempt of danger.”

Brave men both, and a terrific photo brought back to life. Both men survived the war. https://britisharmyancestors.co.uk/