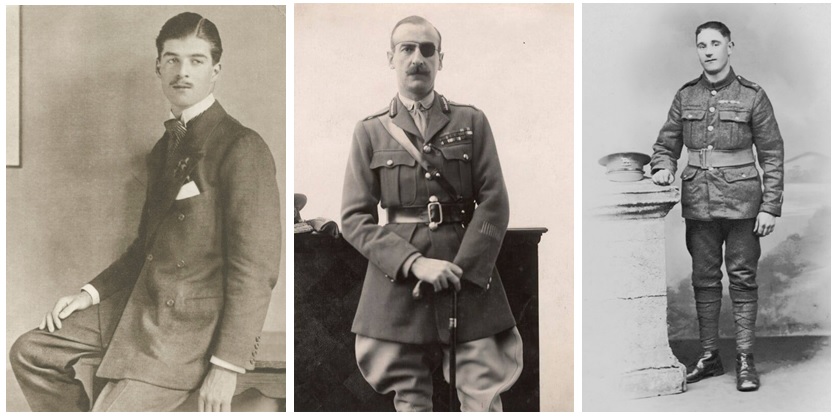 Every day on the British Army Ancestors Facebook page I take time to commemorate a British soldier. This post will look at three of the men I have remembered recently; from left to right: Edward  Wyndham Tennant, Adrian Carton de Wiart and Victor White.

The poet Edward Wyndham Tennant was killed in on the 22nd September 1916 whilsy serving with the Grenadier Guards. His portrait and the quotation below are published on the Winchester College Roll of Honour.

“Tennant wrote home describing the experience [of the battle of Flers-Courcellette on the 15th September 1916], how difficult he found it and how thankful he was to be alive at the end of it. Tennant’s company remained in the line near Combles, south east of Guillemont, on the night of 21st/22nd September, and while he was out sniping, he was killed. His Commanding Officer wrote to his parents: “Bim was sniping when he was killed instantaneously by a German sniper. His body is buried in a cemetery near Guillemont. The grave is close to that of Raymond Asquith, and we are placing a cross upon it and railing it round today.” Tributes poured in, one of which so moved his mother, that she quoted from it on the memorial erected to her son in Salisbury Cathedral. “When things were at their worst, he would pass up and down the trench, cheering the men, and it was a treat to see his face always smiling. When danger was greatest his smile was loveliest.”

The quotation found its way onto Edward’s memorial in Salisbury Cathedral and I took this photo of it when I visited Salisbury in October 2015.

You’d be hard-pressed to find as many wound stripes on a soldier’s arm as are displayed here. The man is, of course, Lieutenant General Sir Adrian Paul Ghislain Carton de Wiart VC, KBE, CB, CMG, DSO and according to some online sources he was wounded eight times (although I count ten wound stripes in this image).

He lost his left eye and part of his ear in Somaliland in 1914, and his left hand at Ypres in 1915. His deeds are extremely well-documented and there are plenty of photos of him online, some of which are now re-published on https://britisharmyancestors.co.uk/. The image I have reproduced here is courtesy of the National Portrait Gallery which has a very useful, and growing, online presence.

L/10954 Pte Victor White was a career soldier who enlisted in the Queen’s (Royal West Surrey Regiment) in about April or May 1915. He survived the war and sent this photograph of himself to his parents in June 1920.

The L/ prefix on regimental numbers for men who served with certain line infantry regiments is always a useful indicator that that the man concerned had signed up as a career soldier. Men enlisting for war-time service only would normally have signed up for X years or the duration of the war, whereas men wanting to go into full-time soldiering would have generally signed up for 12 years’ service; a combination of service with the colours followed by a period of service on the army reserve.

If this man served out his military service, he would not have been discharged from the army until 1927 and therefore almost certainly has surviving papers with the Ministry of Defence which could be requested for a small fee.