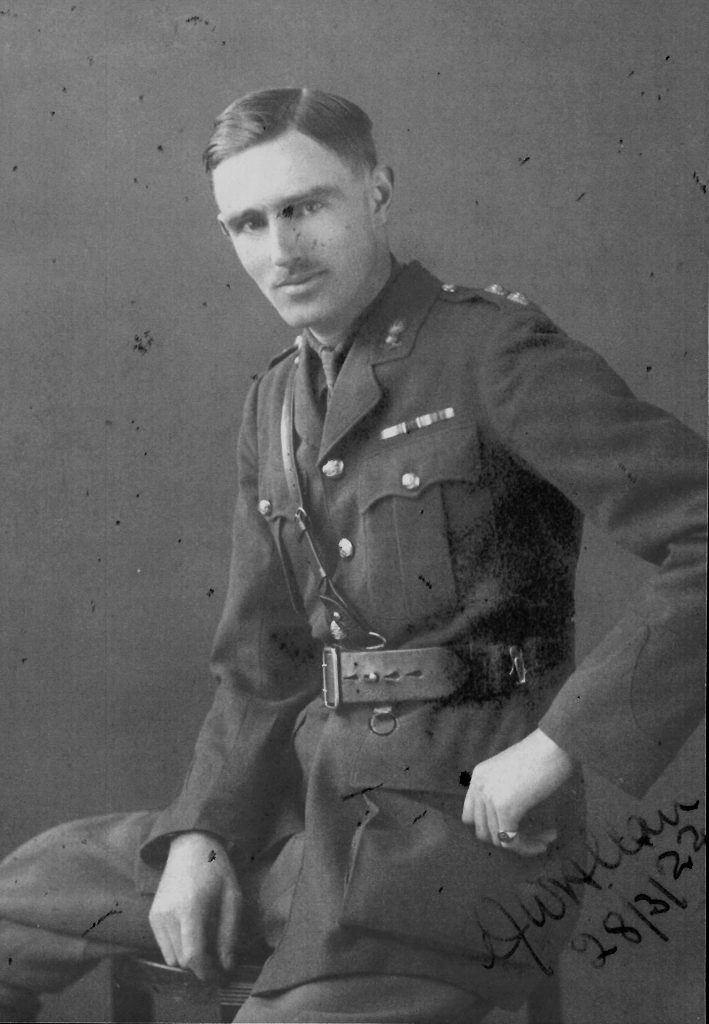 Helpfully, there’s a date on this photograph: 28th March 1922. I bought this on eBay in August 2017 and I’m delighted to be able to tie this in to a medal index card on this site. Arthur Allan served with the Royal Garrison Artillery (RGA) as a second lieutenant but he was a lieutenant by the time this studio portrait was taken. Another man remembered by British Army Ancestors.

I know little about this man but he is probably the same Arthur John William Allan whose birth was registered at Knaresborough, north Yorkshire, in the first quarter of 1894. Baptism records on Findmypast note that he was the son of Lewis Forsyth and Emily Agnes Allan and that he was baptised in the parish of Bilton on the 25th March 1894. Lewis and Emily were living at 20 Studley Road, Harrogate, and Lewis was working as an insurance secretary.

The 1911 census records Arthur living at Wallsend-on-Tyne and working as a marine engine fitter. His mother is recorded at the top of this return as “wife” but Arthur’s father is mising. Two brothers, George and Robert, also feature on the return. Emily’s mother, Elizabeth, and an 18-year-old nephew, Harry Williams Jones, were also present on census night.

Arthur’s medal index card notes that he arrived in France on the 1st September 1915. In the photograph, Arthur is clearly wearing the three First World War campaign medal ribbons. His service record almost certainly survives with the MoD and could be ordered by visiting the Veterans UK site.

Arthur Allan died in 1980, his death registered in Worthing, West Sussex in the first quarter of 1980. I remember that time well because this was when my own grandfather, Walter Leonard Nixon, also died. He would have been a year older than Arthur Allan and like Arthur was also a First World War and RGA veteran who is also remembered on this website.