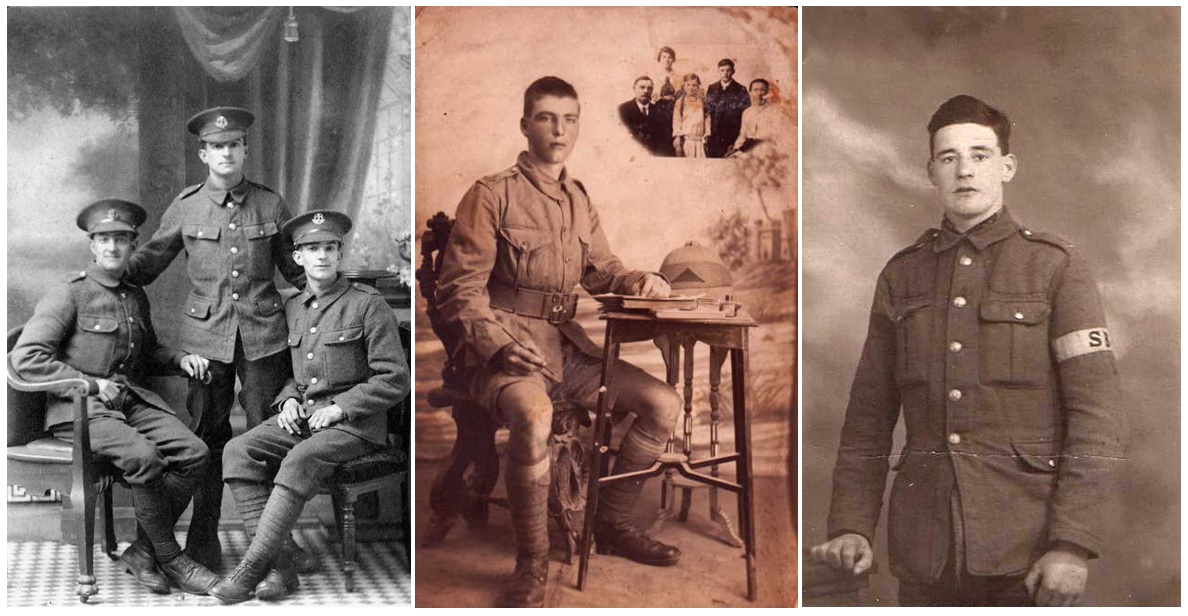 Every day on the British Army Ancestors Facebook page I take time to commemorate a British soldier. This post will look at three of the men I have remembered recently; from left to right: the Allvey brothers from Bow, Albert Hazelhurst and Sidney Newham.

The Allvey boys all joined the Middlesex Regiment during the First World War and all survived. Born in Bow, east London, they are, left to right, G/20506 Pte Charles Edward Allvey, G/14001 Pte George Allvey, and G/20507 Pte (later Cpl) Henry Allvey, Middx Regt. Judging by their regimental numbers, George enlisted first in July 1915 and Charles and Edward, with consecutive numbers, joined together in October 1915. George and Henry would serve overseas with the 20th Battalion whilst Charles served with the 19th and 1/10th Battalions. Henry would later transfer to the Wiltshire Regiment and as 39948 Cpl Allvey, would serve with the 1st Battalion.

The 1911 Census shows the brothers living at their home at 98 Wellington Road, Bow with their parents and two sisters. Charles was married and had moved his wife and two young children into the home, and the boys’ sister Alice was also living at the same address with her husband. So that’s 11 people in what must have been quite a crowded house.

The only Allvey casualty I could find for the First World War was William Allvey, a cousin of the three boys. His parents also lived in Wellington Road – number 83 – and he was killed in action on the 10th February 1915.

Albert Hazlehurst enlisted with the 4th Cheshire Regiment in February 1915 and by August that year he was fighting on Gallipoli. He survived that hellish place and probably sent this photo home to his family when he was in Egypt or Palestine. Still only 19 years old, he was killed in action on the 6th November 1917. Albert has no known grave and is commemorated on the Jersusalem Memorial. I wonder how many times over the coming years this photo was fondly touched by his grieving parents.

This man is a stretcher bearer as can be seen from the SB armband he wears on his upper left arm. Sidney Newham served overseas with the 1/20th County of London (Battalion), London Regiment as 4145 (later 631734) Pte Sidney C L Newham between the 10th November 1915 and the 7th October 1918. This photograph of him was taken in March 1917 by which time ‘Sid’ (as he writes on the back of this card) would have seen a lot of action on the Western Front.  He was a stretcher-bearer as can clearly be seen from the SB armband he is wearing. Happily, he survived the war but did not live to enjoy a long life, dying in Harwich in 1950 aged only 55.