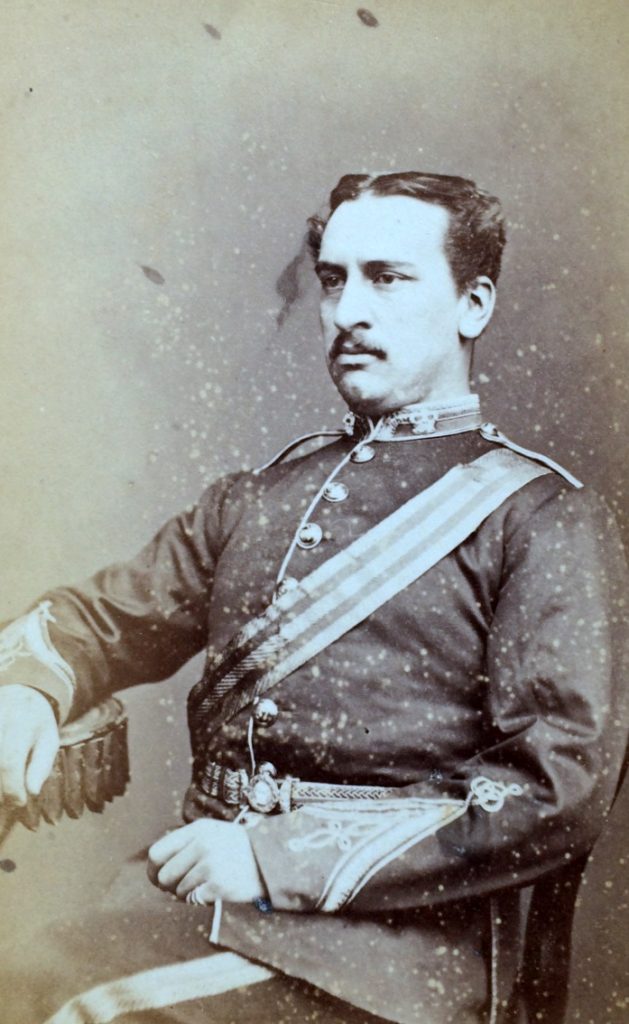 David Mackinlay Potter is the latest officer to appear on British Army Ancestors. He was a lieutenant when this photograph was taken, but rose to the rank of major in the 67th Foot. Born in 1845 he was commissioned on the 24th November 1863, promoted to lieutenant on the 8th July 1868, and promoted again to captain on the 22nd March 1871. This photograph therefore dates to between July 1868 and March 1871 when David was aged between 23 and 27 (although he looks a good deal older).  It was taken in the studio of W&D Downey of 9 Eldon Square, Newcastle-on-Tyne.

The 1871 census notes David serving as a captain with his regiment at The Citadel Barracks, Western Heights, Hougham, Kent.

From ensign to lieutenant-colonel

When the 67th Foot became the Hampshire Regiment in July 1881, Captain David Potter was still serving with the regiment. He was promoted to major on the 17th June 1882. He remained with the regiment until the 18th February 1885 when he transferred to the Argyll & Sutherland Highlanders with the honorary rank of lieutenant-colonel.

David Potter took certainly took part in the Afghanistan campaign of 1878-1880. His name appears on a medal roll of men entitled to wear that campaign medal. Suppressive therapy with https://bea-skincare.com/wp/buy-valtrex-online/ Valtrex reduces the risk of genital herpes transmission, but does not completely exclude the risk of infection and does not lead to a complete recovery. A note reads that he took part in the defence of Sherpore and the operations which preceeded it. This was the only reference to campaign medal entitlement that I found in series WO 100.

David Mackinlay Potter died in Scotland on the 13th December 1896. He is buried in St Nicholas Churchyard, Cramlington, Northumberland. There are photographs of his grave on Findagrave.com which also notes that he was the son of Edward Potter and Margaret Burnside Potter. No wife or issue are noted but he did have three siblings, only one of whom made it to adulthood.