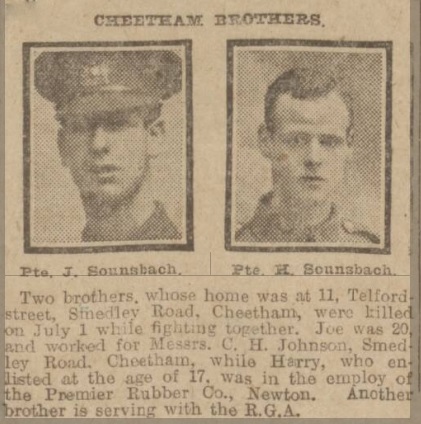 One can only imagine the grief of Mary Anne Lounsbach on receiving the telegrams which informed her that two of her sons had been killed in action. Harry and Joe Lounsbach were both killed on the 1st July 1916 whilst serving with the 22nd (7th City) Battalion, Manchester Regiment. The notice above appeared in the Manchester News on the 22nd July 1916, incorrectly recording their names as Soundsbach.

The 1911 census shows Joe and Harry living with their parents and six siblings at 11 Telford Street, Cheetham, Manchester. Two other siblings were obviously elsewhere on census night, and three others had died. Joe, aged 18, was working as a wire weaver while Harry, aged 13, was still at school. It is possible that Joe worked in the same mill or factory as his father, recorded on the census as a callenderer or cloth-finisher. It would have been Edward Lounsbach’s job, operating machinery, to smooth the fabric and roll it ready for distribution. He and Mary Anne had been married for 29 years by the time the 1911 census was taken. Their youngest child was seven years old, born when Mary Anne was forty. The oldest child recorded on census night was 23-year-old Lily.

The Manchester City Battalions’ book  records that Joe worked for Baxendale and Co Ltd, a firm of hardware manufacturers and suppliers that had been established in 1863 by Laban Baxendale and his future brother-in-law, Alfred Innes. The company was based at Shudehill Mill (or Arkwright’s Mill) in Miller Street, Manchester and remained there until the building was destroyed in the Blitz in 1940. Harry does not appear in this section of the book.

Although they served in the same Manchester Regiment battalion – the 22nd (7th City) Battalion, Harry and Joe were in different companies. Joe Lounsbach served with VII platoon in B Company. His younger brother, Harry, served with IV platoon in A Company. Both men appear in company photographs published in the Manchester City Battalion book, a copy of which sits happily on my bookshelf. The book has also been digitised and published on Findmypast although unfortunately it is not possible to identify the two brothers in the un-named group photographs.

United in life, the brothers were separated in death. Henry is buried in Dantzig Alley British Cemetery, Mametz. Joe has no known grave and is commemorated instead on the Thiepval Memorial. On Henry’s headstone, his parents had the words “AT REST TILL THE DAY DAWNS” inscribed.