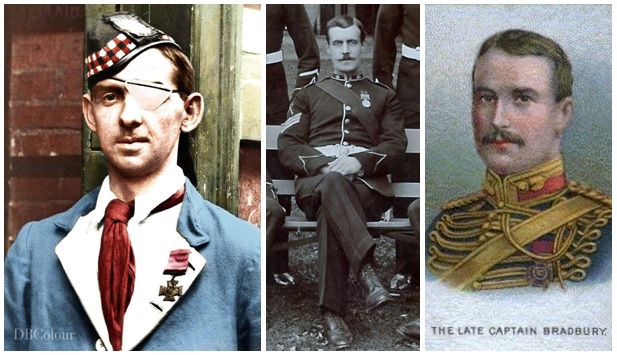 Every day on the British Army Ancestors Facebook page I take time to commemorate a British soldier. This post will look at three of the men I have remembered recently; from left to right: William Angus, Charles Churcher, and Edward Bradbury

This is a famous photo given a new perspective by artist Doug Banks, more of whose work can be seen at https://www.facebook.com/ColouriseHistory/. The soldier is William Angus VC (28 February 1888 – 14 June 1959) of the Highland Light Infantry who was awarded his country’s highest honour for his bravery at Givenchy-lès-la-Bassée on the 12th June 1915.

Lance-Corporal Angus, serving with the 8th HLI but attached to the 1/8th Royal Scots had only just retured to active service, having been wounded at Festubert. He voluntarily left his trench to rescue a wounded officer, fellow Carluke man Lieutenant James Martin, who was lying within a few yards of the enemy’s position and had been injured by a mine. To do this he had to travel across no-man’s land under heavy bomb and rifle fire, and in so doing received 40 wounds, some of these serious, including the loss of his left eye. His commanding officer said there had been no braver deed in the history of the British Army, and William Angus was much feted on his return to the UK. He was decorated with his VC by King George V at Buckingham Palace on the 30th August 1915.

Colour Sergeant Charles William Churcher of the Hythe School of Musketry became champion shot of the army in 1905 and whilst this crop of him appeared in a group photo probably taken between 1902 and 1905, a named photo published in The Graphic bears remarkable similarities to this man. Read more on the Facebook post which was published on the 3rd April.

Edward Kinder Bradbury was one of three men to be awarded the Victoria Cross for his part in the action at Nery on the 1st September 1914, an action which also cost him his life. His VC was awarded “for gallantry and ability in organising the defence of L Battery against heavy odds.”

The black and white photo was published in The Bond of Sacrifice (and elsewhere) while the colourised image, complete with the medal he would never wear, was later published on a Wills cigarette card. Edward Bradbury was 33 years old when he died and is buried in Nery Communal Cemetery.