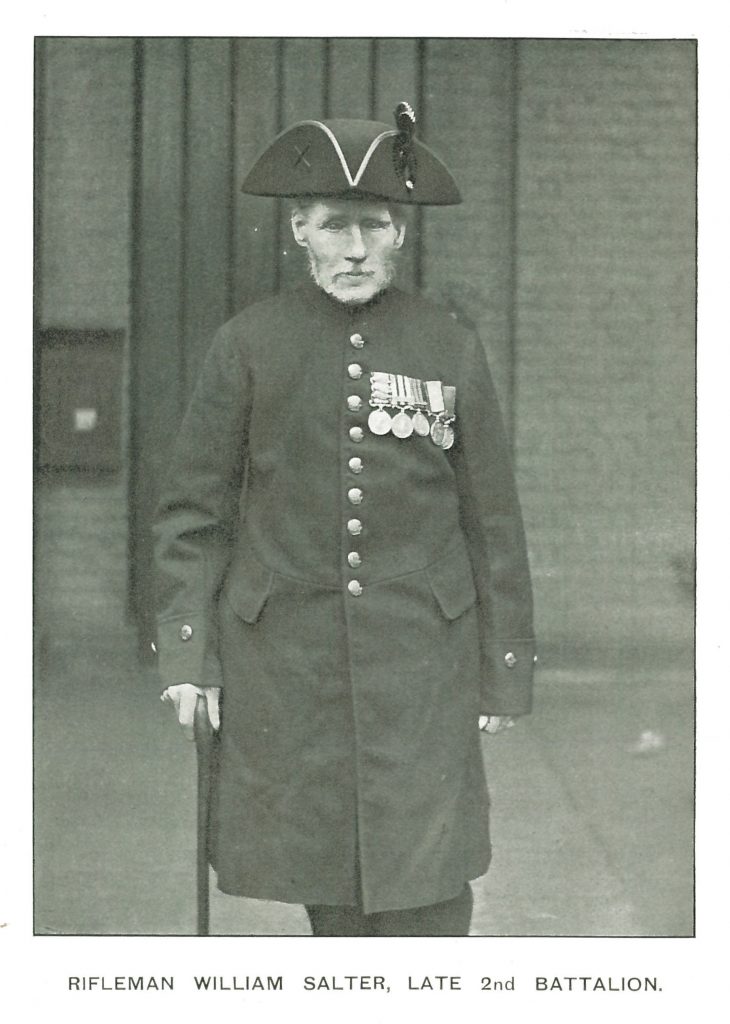 This superb photograph of Rifleman William Salter, taken in December 1906, appears in the Rifle Brigade Chronicle for that year.

William enlisted in the Rifle Brigade in 1854, serving in the Crimea, India and Africa. The RB Chronicle states, “In addition to the Crimean Medal with clasps for “Alma”, “Inkerman” and “Sebastopol”, the Indian Mutiny Medal with clasp for “Lucknow”, the Ashantee Medal with clasp for “Coomassie” and the Turkish Medal, he received the Medal for “Long Service and Good Conduct” and was in possession of four Good Conduct Badges on his discharge. His pension of 1 shilling per diem, granted in 1875, was increased to 1/6 per diem on account of his having been wounded in the Crimea.”

William was admitted to the Royal Hospital, Chelsea on the 1st January 1906 and, when this article was written, he was in the infirmary. There is a death for a William Salter, aged 73, which was registered at Chelsea in the third quarter of 1908 and my guess is that this is probably the same man.

William’ four-page attestation paper survives at the National Archives as WO 97/2164/180. This entire collection has since been digitised and William’s file can be accessed here on Findmypast (subscription or pay-as-you go credits required). An index of ALL records in WO 97 is one of the many collections that can be searched on the British Army Ancestors website.