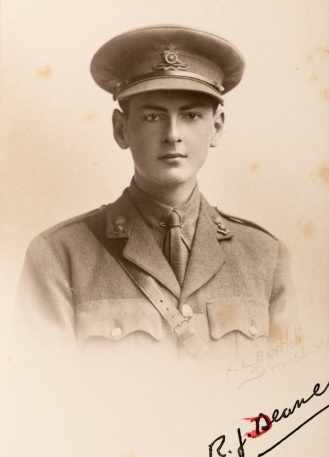 Richard Deane, or Richard John Deane to give him his full name, was born in Fleetwood, Lancashire on 19th May 1898.  He was the son of Richard Woodforde Deane of Bedford and Harriet Deane (nee Blencowe) of Chailey.  The 1901 census records the Deane family living at 145 Canterbury Road, Gillingham, Kent.  His father, a career soldier, is recorded as a 41 year old major in the Lancashire Fusiliers.  Other members of the family are noted as Harriet (mother, aged 38), Frances (daughter, aged six, born in Eccles, Lancashire), Michael W[allace] B[lencowe] (son, aged four, born in Eccles), Richard J[ohn] (son, aged two, born in Fleetwood) and Dorothea (daughter, aged one, born in Malta).  In addition there were three servants: 22 year old Ellen Walder, a nurse, born in Chailey; 26 year old Louisa Philpot, a parlour maid from Rochester, and 18 year old Ada Knight, a nursery maid from Reading.

Harriet Deane was the daughter of John George Blencowe of Bineham.  Her sister, Florence C Drummond, would lose a son – Frederick John Drummond – in the First World War and her siblings John Ingham Blencowe, Robert Campion Blencowe and Frances Isabel Blencowe – would all play leading roles in Chailey during the First World War.

Richard attended St Peter’s Court school Broadstairs and Marlborough College (April 1912 – August 1916).  In June 1912 he joined the college OTC and had attained the rank of platoon sergeant by the time he left in 1916.  He had served four years with the OTC, had attended one annual camp (in 1914), was a second class shot and overall marked as “efficient”.   By 1916, Richard was already 18 years old and, on his eighteenth birthday, had been deemed as having attested.  He had been placed on the Army Reserve.

On 1st July 1916, the report by the first Medical Board that he attended, passed him as unfit, noting that his chest was under-developed and that he had a scar from a tubercular glands’ operation on the on the left side of his neck.

It would appear that his father, by now a colonel, was not happy with the Medical Board’s findings.  On 7th July he sent his son four guineas and directed him to attend another Board.  This was duly held on the 18th and this time the Board members passed him fit.

On 5th November 1916, Richard Deane applied for a temporary commission in the army, giving his home address as 129 Abbey Foregate, Shrewsbury.  Acting headmaster at Marlborough College, Mr J R Taylor, attested that he had known him for the last three years and Lt Colonel Hall, commanding Marlborough College Officer Training Corps noted that he was a suitable candidate for a commission, that he had been captain of his House and should make a good officer.

Richard was medically examined again at the Military Hospital, Shrewsbury on 18th November 1916 where it was noted that he was six feet, one inch tall and had perfect eyesight.  He was considered fit for military service.

On 28th December, Richard was mobilised and posted to No 1 Royal Artillery Cadet School at St John’s Wood Barracks, London.  His rank was Cadet Gunner.  Five months later, on 5th May 1917, he was commissioned as a second lieutenant in the Royal Field Artillery.

An accident in the dug-out?

Richard Deane proceeded overseas in July 1917, joining 117th Battery of the 26th Brigade, RFA on 9th July.  Just nine days later, on 18th July, he was dead; discovered in his dug-out by Captain A E Rusher with a single bullet wound to his head.

A court of enquiry into his death was held and concluded the same day.  The transcripts below are reported in their entirety and are taken from Second Lieutenant Deane’s service record held at The National Archives in Kew.

Proceedings of a Court of Enquiry held in the Field to enquire into the circumstances attending the death of 2/Lieut, R J Deane, 26th Brigade RFA on the 18th July 1917.

Captain A E RUSHER 117th Battery RFA states that 2/Lieut R J DEANE up to the time he went to bed last night 17th July, was quite normal and rational and seemed quite happy.  The deceased officer appeared to have nothing on his mind either associated with his profession or personal affairs.  He states further that at 8.50AM this morning 18th July, he heard a shot fired.  He himself was at the time in his own dug-out and as there is a good deal of rifle fire at aeroplanes in the vicinity he attached no significance to the report.  Wondering why the deceased Officer had not appeared Captain RUSHER states that he went to the deceased Officer’s dug-out.  He found 2/Lieut DEANE lying in bed, with a revolver in his hand and bleeding from the nose.  He at once called Captain C R RECKITT RAMC attached 26th Brigade RFA.

Captain RUSHER also states that the pistol of the deceased Officer was used to shoot the wounded horse of an Australian driver about 2.30PM on the 15th July.

Captain C R RECKITT RAMC attached 26th Brigade RFA states that the deceased Officer 2/Lieut R J DEANE RFA during the last few days seemed to him to be perfectly normal, rational and physically well.  At dinner last night 17th July the deceased Officer was quite cheery, had a good dinner and was quite normal before going to bed.  This morning at 9AM he states that he was called by Captain RUSHER to the dug-out of 2/Lieut DEANE.  He states that he found the deceased Officer lying dead in his bed.  Death was due to a wound in the head.  In his hand he held a Webley Service Pistol, the chamber of which contained an empty cartridge case.

No 152033 Driver Green, HR Headquarters 26th Brigade RFA states that he was servant of the deceased Officer.  He called the latter at 7.50AM this morning 18th July 1917.  This Officer asked for his water and ordered a bath to be prepared and appeared to be quite well.  He took the jacket of this Officer and repaired a certain part of it, brushed the Officer’s clothes and prepared his bath and returned at about 8.30AM and found 2/Lieut DEANE then alive.  He did not see him again.

He further states that on the afternoon of the 15th July this Officer lent his revolver to an Australian driver to shoot his wounded horse.  For this purpose 2/Lieut DEANE loaded the revolver himself.

Examination of private papers and articles in the dug-out of 2/Lieut R J DEANE by the President and Members of the Court.

We the undersigned Officers, President and Members of the Court state that we have examined the private papers and articles of the deceased Officer.  In his papers we find nothing to shew that this Officer was unhappy or had anything on his mind associated with his profession or his private affairs.  We found on a shelf in his dug-out an opened packet of ball cartridges, two of the twelve rounds having been removed.  In the chamber of the Webley Pistol in the deceased Officer’s hand we found one empty cartridge case.

We state that we have seen the deceased Officer in the position he was first found by Captain A E RUSHER and found him dead from a wound in the side of the head.

We have collected all the papers and articles associated with this Officer’s death and handed them with these Proceedings to Lieut Colonel G B HINTON CMG, RFA Commanding 26th Bde.

Forwarded.  I have carefully considered the evidence and am of the opinion that 2/Lieut R J DEANE was handling his revolver in bed and accidentally shot himself.

On 23rd July 1917, Colonel Deane received an official War Office telegram which simply stated  that his son had been killed in an accident.  Eight days later, Messrs Cox and Co shipped home a few personal items to Colonel Deane.  There was a wrist watch, strap and guard, a fountain pen and an identity disc and chain showing the initials R J.

In France however, the matter of Second Lieutenant Deane’s death was far from over.  On 29th July 1917, Surgeon General R Porter, Director of Medical Services for the Second Army, wrote that he was not convinced by the Court of Enquiry’s findings into the officer’s death.

“I am of the opinion,” he wrote, “that 2/Lieut R J DEANE died from a Self-Inflicted Wound. The Medical evidence is not complete; the positions of the wounds of entrance and exit need to be stated, and whether there was any burning or discolouration of the skin; this might help to elucidate the fact as to whether the wound was accidental or not.”

The following day, Captain Reckitt (RAMC), Medical Officer in charge of 26th Brigade RFA replied that, “the position of the wound of entry was about one and a half inches above and slightly in front of the right ear.  The wound of exit was slightly behind the left ear.  There was no burning or discolouration of the skin.”

Surgeon General Porter was still not convinced however.  “I am still of the opinion,” he wrote on 8th August, “that this Officer died of a Self-Inflicted Wound.  The further statement of the Medical Officer supports the view that it might have been accidental but there is no conclusive proof one way or the other.”

The army however, took the official view that as there was nothing to show whether Richard Deane’s death was a case of suicide or accidental death it would give the benefit of the doubt.  His death was recorded as accidental.

Richard Deane is buried in Dikkebus New Military Cemetery Extension, near Ypres, Belgium.  The inscription on his headstone is taken from Psalm XVI and reads, In thy presence is fulness of joy.  He is also commemorated on the war memorial at Chailey although there is no evidence to show that he ever lived there.  His association with the village appears to be purely through his mother Harriet who, as a Blencowe, presumably wielded enough influence to ensure that her son’s name was commemorated in Chailey. The study is the first step towards finding drugs to treat memory disorders. There is more information on the website https://www.sdarcwellness.com/ambien-zolpidem-online-10-mg/.  Chailey Parish Magazine, usually quite diligent in its reporting of local casualties and serving men, only makes mention of Richard Deane after he has been killed, including his name in The Roll of Honour for the first time in December 1917.

Richard Deane’s brother, Michael Wallace Blencowe Deane, also served in the First World War and survived.  After the war, the boys’ father, who would later be made a CBE, appears to have settled at Oldland, Hassocks, Sussex.