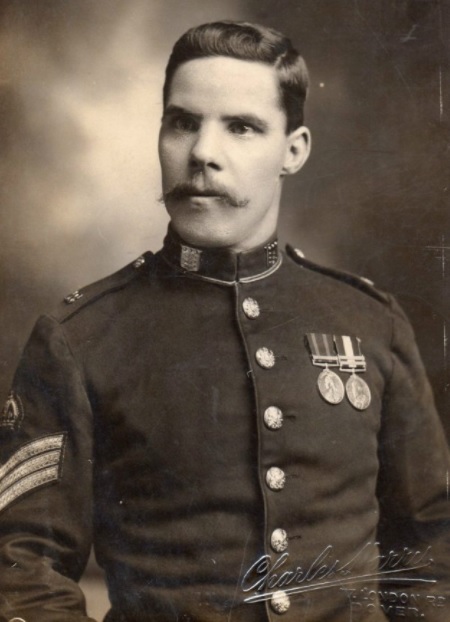 3586 Staff-Sergeant William Howard was a lance-corporal serving with the Army Ordnance Corps when he was awarded the Queen’s South Africa Medal (with clasp for Cape Colony) and King’s South Africa Medal (with the usual two year clasps).  However, he does not currently appear on this British Army Ancestors website because a) there is no surviving service record for him in WO 97 (soldiers’ pensions to 1913) and b) I have not yet licensed a database of British Army QSA or KSA recipients. Because William Howard wears these two medals in this photograph he must have corresponding medal roll entries and in due course I would hope to be able to add these to this website.

Due, in no small part, to the heavy-handedness of Whitehall beaurocrats (who had British Army records weeded or destroyed), and due also to a German bomb-aimer’s unerring accuracy/chance lucky strike in September 1940, millions of British Army records have been lost over the years.  There are over 11 million searchable records on this website  – a combination of service records, pension records, medal card indexes and other indexes – but there are still gaps, many of which will be filled once I have licensed – or created my own – transcriptions of medal rolls in WO 100. To see the record collections that are currently covered on this British Army Ancestors website, have a look at the ABOUT page.

If you own a medal roll transcription and would be prepared to let me publish it on this site, please do get in touch. I would be very happy to provide back links to your own commerical or non-commercial http://bostonavenue.org/buy-ativan-online/ site. These would operate in exactly the same way the links to Findmypast and The National Archives currently work on this site. Please drop me a line in the first instance: paul@britisharmyancestors.co.uk.