I’ve recently added records for the Commonwealth War Graves Commission 1914-1921 to the British Army Ancestors site. That’s 738,386 records of men and women who served with the British Army or Royal Flying Corps who lost their lives during the First World War and immediately afterwards.

In each case, these new records include the same indexed information that you’ll find on the Commonwealth War Graves Commission site, and in any event, there’s a link back from each record to the Commonwealth War Graves Commission (CWGC) page. The information provided by CWGC has improved beyond all recognition over recent years, partly due to the advent of the internet, but also due to the willingness of the CWGC to digitise its holdings and make these available to the public. I am old to remember when you had to write to the CWGC in Maidenhead to enquire about a soldier’s last resting place because that information simply was not commonly available. For that matter, unless you had the 80 volumes of Soldiers Died in the Great War, or ready access to those heavy bound ledgers in Somerset House, your enquiry to CWGC might be simply to enquire if the person you were researching had become a casualty.

Search results give the basic information which might be enough for most people searching for a record; the key regimental details plus the date of death and details of where the person is commemorated. In the example below I show the record for my great uncle, Jack Nixon: 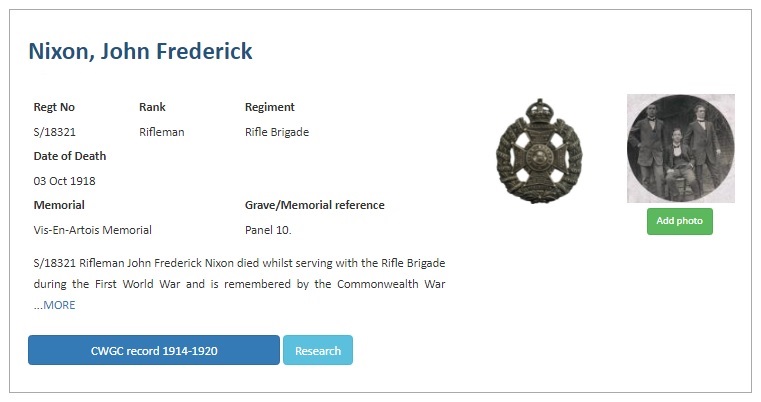 The narrative trailing away is an indication that there is more text available about this man which I can get to by clicking on the blue MORE button or by clicking on his name. When I do so, the following page for John Frederick Nixon appears: 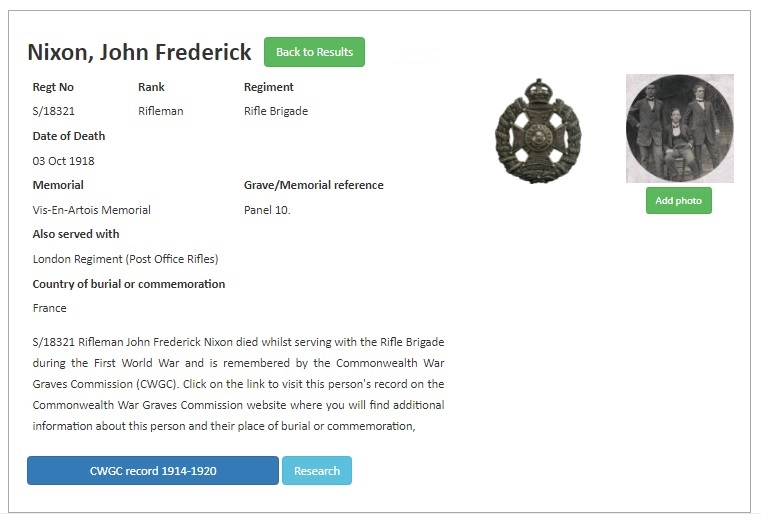 This new page tells me that there is more information on the Commonwealth War Graves Commission website and also that Jack also served with the London Regiment (Post Office Rifles). In fact he was attached to the 8th London Regiment when he was killed in action almost within sight of the armistice.

I hope you will find these new pages from the Commonwealth War Graves Commission 1914-1921 to be a useful addition to this website.