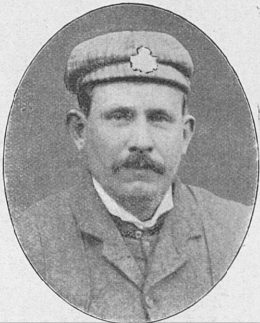 Thomas Greener was born in Horfield, Gloucestershire in about 1861 and by the 27th June 1882, when he attested for service with the Royal Engineers, he was working as a rigger. He was issued with the regimental number 17506 and less than two years later, on 1st May 1884, he married Alice Kingswood at Chatham. To marry ‘off the strength’ or without permission from his commanding officer was not unheard of in the British Army, but it was not common, and especially so for men who had newly embarked on an army career. Marrying off the strength placed a wife in an unenviable position as she could expect no support from her husband’s regiment, and if he was posted overseas she may not even see him for  the next five or six years.

In September 1884 Thomas was appointed unpaid lance-corporal, and between November 1884 and December 1885 he was indeed serving overseas in Bechuanaland, Alice presumably at home on her own. In April 1885 Thomas was appointed paid lance-corporal, and this was followed in Nvember 1887 with promotion to corporal. On the 1st May 1890 he was promoted company sergeant major and placed on the married roll. From now on, his wife and any children would live with him in the barracks and be paid for by the army. Four years later, on the 26th May 1894, Thomas re-engaged to complete 21 years with the army.

Thus far, Thomas’s career could be said to have been a model one. He had performed well and had even been mentioned in newspaper reports in connection with ballooning flights from Aldershot. Rewards for his service had come in the form of regular promotions, and now he was on course for 21 years’ service and a nice pension at the end of it. However, on 27th October 1895 he deserted the army in scandalous circumstances which were widely reported in the local press.

On the 30th November 1895, the Banbury Beacon reported, “A sensation was caused at Aldershot by the announcement that Mr Robert Lawes, who holds a responsible position in connection with a local firm of contractors has been apprehended on a charge of being concerned in robberies of zinc, the property of Her Majesty the Queen, with reference to which a warrant was issued three weeks ago against Company Sergeant Major, of the Balloon section, Royal Engineers, who disappeared.”

On the 2nd January 1896, The London Evening Standard reported, “At Winchester Quarter Sessions yesterday, Robert Laws was found guilty of stealing large quantities of zinc from the Government balloon stores at Aldershot, in collusion with Sergeant Major Greener, RE who has absconded. Prisoner was sentenced to eighteen month’s hard labour.”

It then goes very quiet about Thomas Greener until December 1899 when it was reported in various papers that he had been captured at the Modder River whilst serving with the Boers. His surname was now, allegedly, Green and he had supposedly been supervising the Boers with the making of their entrenchments. The Graphic, which also published the portrait of him, that I have reproduced on this post, noted “He is being sent home for trial and it is to be hoped that he will receive the full punishment due to such a renegade. Greener was in touch with all the secrets of the establishment, and especially the mode of construction of war balloons, and the manufacture of gas for the same. He also knew the most vital secrets in connection with military code telegraphy…”

The trial in the UK would, presumably, have been sensational but by the 27th January 1900 various papers were reporting that he had been court-martialled and shot on Cape Town Common as a traitor, albeit there were others who doubted the veracity of these reports.

And there, in 1900, the matter might have rested except that Thomas Greener handed himself in to the authorities in November 1916, stating that he had come back “to make good in the trenches”. Far from serving with the Boers he had, he said, “deserted on the spur of the moment [and] went to South America where I have worked as a prospector ever since.” He continued, “I read in the papers of a colonel who redeemed the past by his bravery on the battlefield. My own record flashed through my mind. I thought I might do as the colonel did. I could not resist the driving power within me. The call of the blood was too strong…”

Thomas Greener was duly court martialled and reduced to the ranks on the 26th October 1916. The same day he was transferred to L Depot Company. By now, he would have been about 55 years old and it was 21 years since he had deserted. He never did serve in the trenches though, remaining in the UK until discharged, no longer physically fit for war service, at the age of 57 years and two months in April 1918.