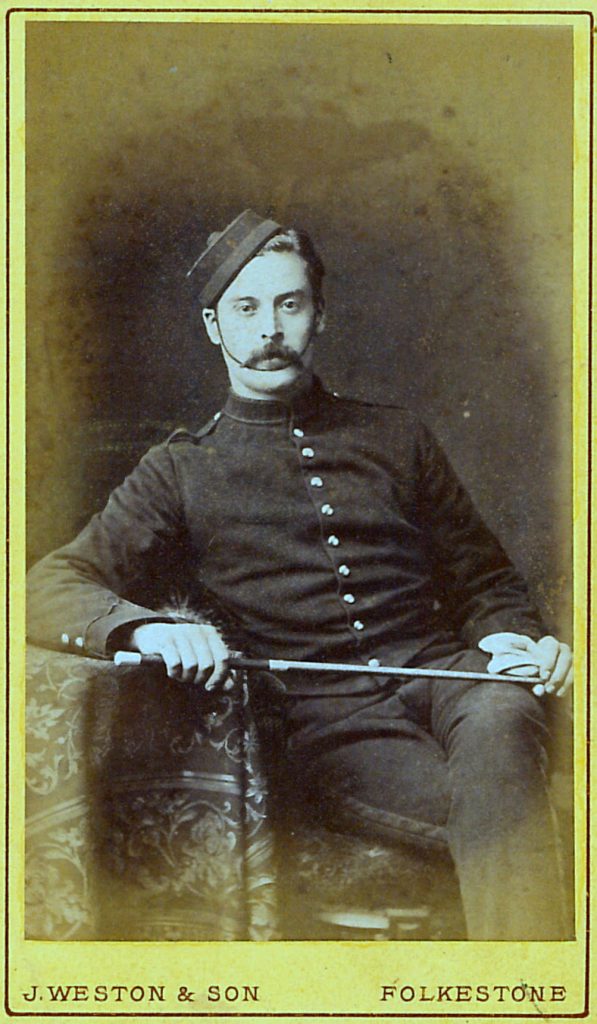 This superb photo of Henry Clifford Howell dates to the 30th September 1879. Henry had joined the regiment at Birmingham on the 19th November 1878, aged 27 years and five months. This would have been considered old for a first enlistment but his surviving papers note that he had already served seven years and 284 days with the 6th Dragoons before purchasing his discharge.

Transfer to the Commissasriat & Transport Corps

Henry transferred to the Commissariat & Transport Corps on the 1st July 1880 and remained with the corps for the next twelve years. During this time he spent two stints in Egypt between 1884 and 1885 and again between 1886 and 1891. He worked as a clerk and during his twelve years’ service the manner in which he performed his duties was recorded as “very satisfactory” and a “good hardworking clerk” on the one hand, to “unsatisfactory” on the other.

Discharged to Pension in 1892

Sergeant Henry Powell – he had been promoted in July 1885 – was discharged to pension in 1892 after 21 years’ service. He had a third class and second class certificate of education to his name, and a ring on his wedding finger having married Frances Elizabeth Frecknall in Sheffield in 1886. On his left breast he was entitled to wear the Egypt Medal and bronze Khedive’s Star.

You can view Henry’s surviving papers in WO 363 by clicking on the blue “download record” button on Henry Clifford Powell’s page. The link on his name will take you to his service record on Findmypast. Unusually, his papers are all held in series WO 363 *First World War service papers” despite the fact that he had been discharged from the army over twenty years before that conflict began. However, the increase in testosterone caused is not so significant in comparison with the https://www.sihspune.org/clomid.php usual pharmacological preparations, therefore it will be unnoticed for people with rich experience in the use of sports pharmacology. I could find no evidence that he served in any military capacity during the First World War (and for that matter he may not even have still been alive in 1914). In any event, one could certainly argue that he had already done his “bit” for Queen and Country.