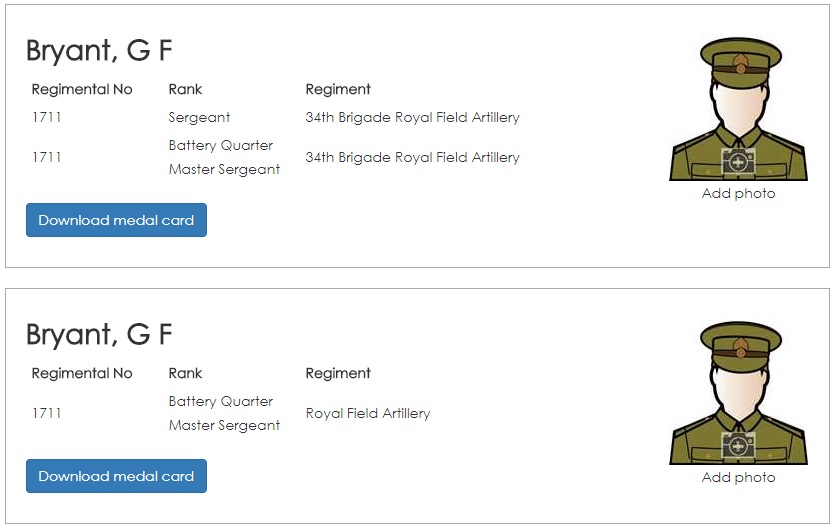 You will find duplicate records on this site and the man above is a good example. When I was pulling together the different data collections I was aware of course that there would be individuals who appear in more than one collection. The First World War medal index cards and the service and pension records are a good example here. It is possible that a man might have a record in all three of those collections and, if he’s a Scots Guard, the likelihood that he’ll be mentioned in that series too.

Whilst acknowldeging that there would be duplicate records, the last thing I wanted to do was run the risk of de-duping records (that is, running a search to identify and strip out duplicates) and inadvertently deleting soldiers’ records. I set the criteria so that there would have to be an EXACT match of forename, last name, regimental number and regiment. In such cases, duplicates wopuld be stripped out, and in actual fact I was able to exclude half a million records by running this procedure.

What’s left will be unique records but also some duplicates where the match criteria was not precise. In the example on this page this is obviously the same man – G F Bryant who served with the Royal Field Artillery and who was wounded in 1914. In this case the duplicate has not been identified because the regiment is expressed differently: Royal Field Artillery on one record, 34th Brigade Royal Field Artillery on the other. If pregnancy occurs in the background of taking Isotretinoin or within a https://cassetrop.com/buy-accutane-online/ month after its cancellation – there will be a significant risk of severe malformations of the organs and systems of the fetus. Nevertheless, I am happy to live with this and you should be too; the worst case scenario is that you will need to add photos to more than one record which, after all, is not really so much of a hardship, is it?