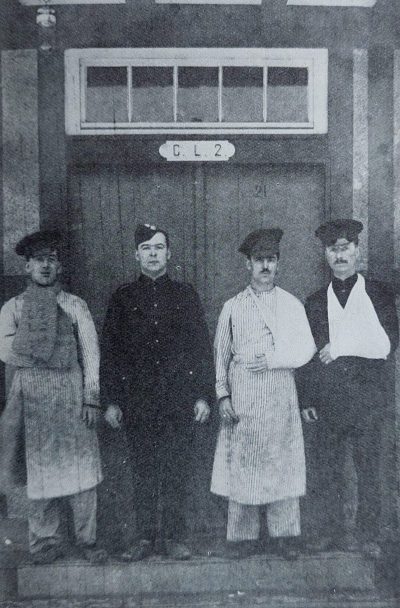 This photo of 4814 Pte George Tubb of the King’s (Liverpool Regiment) and his three comrades is a recent discovery for me. George is the man third from right, his left arm in a sling having been shattered by a German bullet on the Somme in August 1916. The photo was sent to the editor of the 5th London (City of London) General Hospital by George’s father who wrote:

“He joined the Dragoon Guards at the commencement of the war, but was discharged after six months’ training as medically unfit. He then got a berth on the Elder Dempster Line as a cook and, after three voyages to West Africa and one to South America, he got back to Liverpool and joined the King’s (Liverpool Regiment), machine gun section.”

The men are pictured at the PoW hospital or lazarett at Ohrdruf. The photo has been added to George’s profile on British Army Ancestors.